Sleep apnea is a condition that occurs when a person regularly stop breathing during sleep. Each episodes of stop breathing may take 10 seconds or longer. It can be classified as mild, moderate, or severe, based on the number of apnea and slowed breathing (hypopnea) per hour. Apnea episodes may occur from 5 to 50 times an hour. There are three types of sleep apnea:

This topic focuses on obstructive sleep apnea. In the age group of 30 years & older, the disorder is about three times more common in men than women.

The severity of sleep apnea depends on how often the breathing is interrupted. The following averages can be used as a guide

This can be determined by a Sleep Study (Polysomnography). The test is available in both Private and Public Medical Centre. 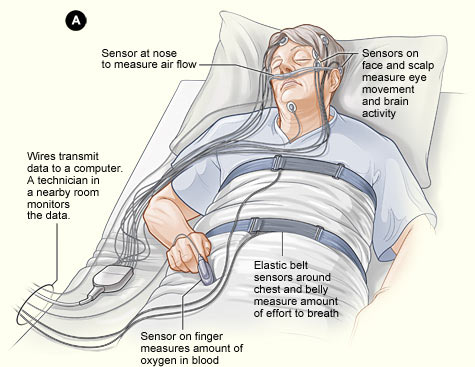 Obstructive sleep apnea (OSA) usually is caused by a:

Partially blocked breathing airway does not cause problem during the day when the person in upright position. However, during sleep, fatty tissue in the neck can press down the airway, narrowing it and causing Obstructive Sleep Apnea. This condition make worst by alcohol or medications that cause relaxation of throat muscle and subsequently collapse during sleep.

While sleeping, the muscles of the throat relax to the point of blocking the airway above the voice box. Breathing stops, for between a few seconds and up to one minute, until the brain registers the lack of breathing (or a drop-in oxygen levels) and sends a small wake-up call. The sleeper rouses slightly, typically snort and gasps, then drifts back to sleep almost immediately. In most cases, the person suffering from sleep apnea doesn’t even realise they are waking up. This pattern can repeat itself hundreds of times over every night, leaving the person dogged by sleepiness and fatigue.

The main symptoms of sleep apnea are loud snoring frequent wake up during sleep and sleepiness during the day. Your bed partner may notice periods when you stop breathing during sleep. Generally, People with sleep apnea have snoring but not all snorers have sleep apnea. Some of the associated symptoms include:

People with significant sleep apnea have an increased risk of :

Obstructive sleep apnea and snoring can be prevented by:

Protect yourself and others from COVID-19